AHHHHHH is right! If you’re fanning your self and feverishly reading these words, then my friend you’ve encapsulated my emotions for when Geoff asked me six beautiful words. Here’s the low down… 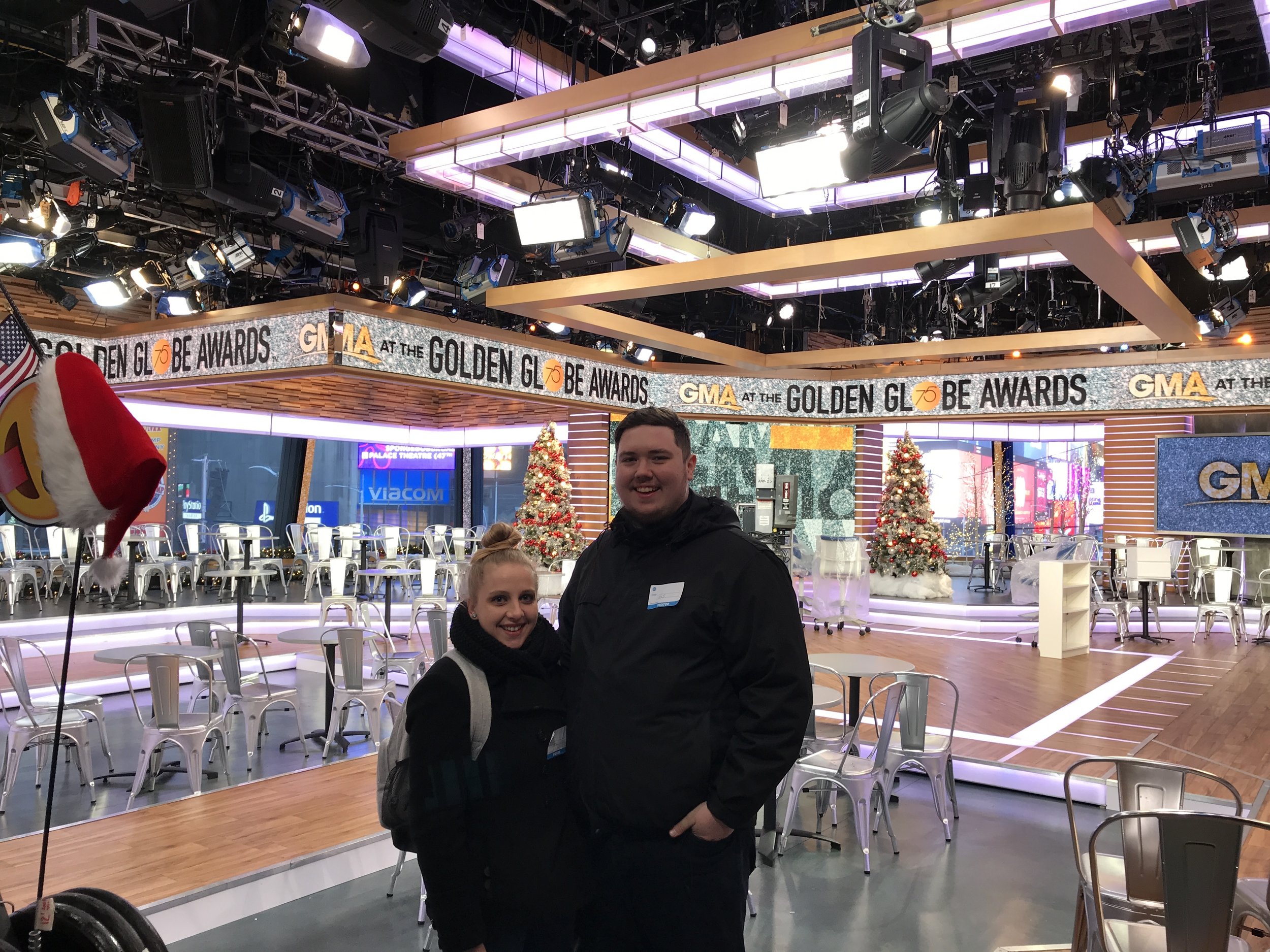 Back in December, Geoff took an amazing new job with a company called Jetwave Wireless. Jetwave specializes in radio frequencies, handheld mics, packs, and things of the sort. One of their biggest shows is the Dick Clark’s Rockin’ New Years Eve with Ryan Seacrest in Times Square, New York. Yeah, I know, no biggie, right?!

Geoff knows how extremely obsessed I am with Christmas in New York so he had tried to budget us getting to New York for Christmas, but money was tight so we backburned the idea it until next year. Until the week of Christmas…

On Tuesday, December 26, Geoff’s boss, Jim, gives him a call and tells him he needs Geoff to come up to NY for day to film and shoot some work for the new website. He and I both couldn’t believe it! We were so excited! Me, I was getting my Christmas in New York trip and he was getting to be involved in the coolest show just 3 weeks after he came on with Jetwave.

He immediately bought us train tickets that would have us leave at 3am from Union Station on Thursday December 28 and arrive in New York around 6am. Mind you, this trip was also going to have us return to D.C. at 6am on Friday the 29th. A literal 24 hour trip packed with so much to do and see. Enthusiastic and thrilled for our little getaway we pulled an all nighter Wednesday to Thursday and headed to New York!

Upon our 6am arrival in New York, we quickly figured out that the city that never sleeps, actually did sleep and there was practically nothing open. We wandered in the teen degree weather looking for a place that was open to grab some breakfast. We stumbled upon this cute diner and tucked ourselves away for about 2 hours. After we had thawed and gotten our tummies full, Jim called Geoff to let him know where to meet the team in Times Square.

We walked a couple of blocks and met up with the team. I was introduced to all of Geoff’s new co-workers and we were given a tour of the setup; all of which included two trailers parked right in front of the GMA studios on 44th.

I, soon, found out that Jetwave had a multitude of clients right in that area. With that, we were given tours of the GMA studios and Geoff had the opportunity to shoot a bit where his teammates were installing cables for the NYE show. It was quite the treat to be on set! 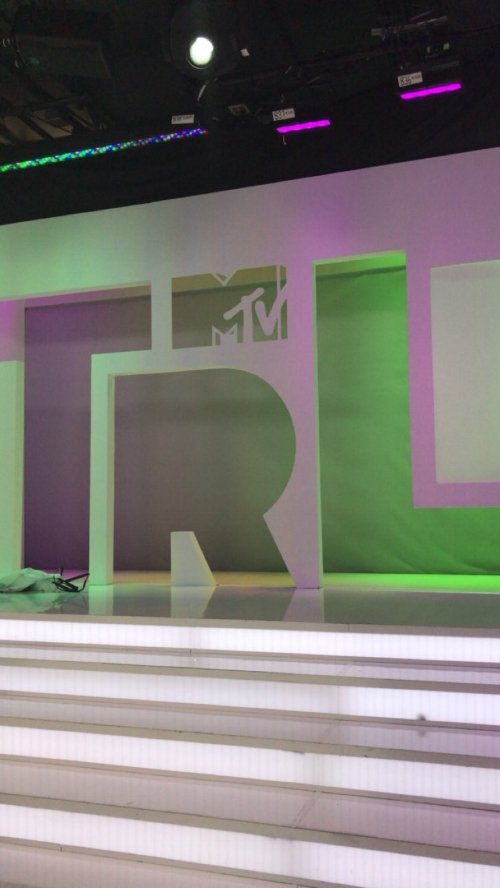 Our next stop was the Viacom Studios where I totally fangirled over the new TRL set while Jim and Geoff talked business with some production people. I told MTV’s production guys that I had grown up on the original series of TRL and how heartbroken I was to hear the announcement of it’s cancellation in 2008. Thankfully they brought the show back last October even though it really isn’t what is was back then. But, in all of its glory, I still couldn’t believe that I was standing in the room where the Backstreet Boys, N’Sync, and Britney Spears (just to name a few) had performed! I completely freaked!

After Viacom, we headed to the set up where artists Mariah Carey and Camila Cabello would perform for the NYE show. A couple of Geoff’s coworkers were working on setting up cabling and wires. So while he shot them, I just stood, center stage, and took it all in! As the time was getting later, the temps were continually dropping. New York was starting to become not so fun anymore, lol. While Geoff wandered with his co-workers and continued to shoot, I sought refuge in the stores; warming my hands and trying to not freeze to death. Geoff would meet up with me at the Disney store a little later where he would get me the cutest spirit jersey with Neverland written on the back. It’s my favorite tee I own now.

He told me once we checked out that he was pretty much done shooting and that the crew was wrapping up for the day. The only issue was it was now 4pm and our train wasn’t leaving until 3am the next morning back to D.C. We were frozen, hangry, and just overall sick of the cold. He asked me if there was anything I wanted to see before we left. I told him I’d love to go to Rockefeller Center to see the tree.

We took an Uber over and climbed out. The place was buzzing with people trying to get pictures, facetiming family that wasn’t there, and just general traffic walking to and from. It was then, that Geoff told me to “Hold this,” as he handed me his backpack. He has the biggest smile on his face as he unzipped a compartment and pulled out a little box. My face lit up, I looked at him, and smiled the biggest smile. He pulled me in really close, kissed me, and asked…

Do you want to get married? 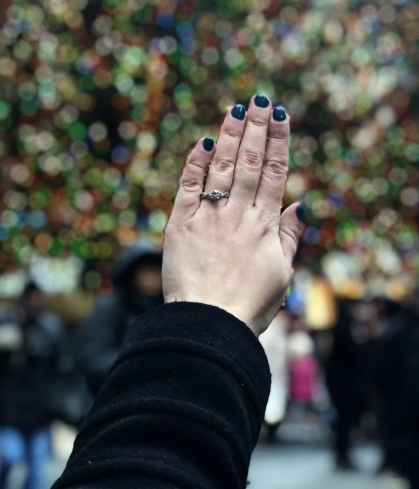 As he was giving me the ring box to hold, my snarky little self didn’t say yes right away. *face palm* I nervously giggled and said to him, “you have to get on one knee!” “No. I don’t want to,” he replied with a nervous laugh and a kiss. “oh, please! For me?!” I begged. Sidenote: for those of you who don’t know, Geoff HATES being center of attention. He’s a behind the scenes type of dude when it comes to anything involving people, events, parties, etc. So I knew me asking him to get on one knee would be a big deal for him. So when he did this little up down number, I giggled at him, told him it was his responsibility for putting that ring on my finger and we kissed. We just couldn’t stop giggling and smiling at each other.

We had avoided a huge crowd from circling around us and making a big scene. Something right in Geoff’s alley and for me, something I now think about, as the most perfect moment for us. I was just so excited to wear the ring that we has bought together on Black Friday out in public. We were getting married!!!! A stranger must’ve of seen the whole thing because he waltzed up to Geoff and said in his New Zealand accent, “CONGRATULATIONS, MATE!” As we were trying to put together a selfie, a woman saw us struggling (height difference, hello!) and offered to take our picture. I told her that would mean a lot to us as we just got engaged. You would’ve thought that I had just told her were the Queen’s grandkids or something because she immediately overcame with emotion and started using my iPhone 7 as a DSLR. Taking pictures with portrait mode, different angles, and multiple shots. Overwhelming at the time, but so grateful to have those moments captured. We closed out our trip with meeting up with a college friend of mine and visiting B+H Photo. There, Geoff would buy himself the Sony A7! It was watching a little kid in a candy store. Makes my heart warm to see my guy so happy! Thankfully, Geoff was able to move our tickets up to a 10pm departure time. We grabbed a quick bite and headed to Penn Station thereafter; newly engaged and all. 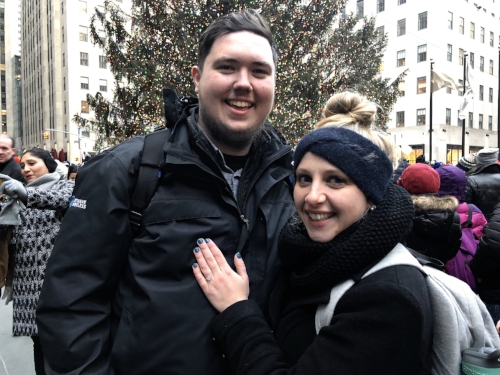 You deserve to feel peace in the midst of great joy.

Your journey to the aisle should feel rewarding and stressfree.

We guide you through the one of the best moments of your life... with love.

Feel confident on wedding day and have fun along the way.